What is Kakvi? How does it compare to Jaggery and Honey? 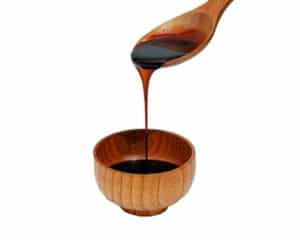 Sugar, in and of itself, isn’t bad.

Sugar, made in a factory, refined until it loses all nutrition, and then hidden (using various fake names) at the back of the pack – is bad. Because that sugar leaves you craving for more, and you can’t even make a conscious choice since you don’t know it’s in there.

So, when it came to using a sugar in our Muesli range, we went to great lengths to find something that we could proudly use, and proudly declare upfront.

That something is Kakvi. The most-nutritious, and least processed form of sugarcane we could find. And here is the lowdown on what it is.

Note: No matter how nutritious it is, it’s still a sugar. So if you’re diabetic or completely off sugar, pls consult a doctor/nutritionist before trying this.

Kakvi essentially translates to liquid jaggery. Solid Jaggery, or gur as we know it, is made from unrefined sugar. It is obtained by boiling raw, concentrated sugar cane juice. In itself, jaggery is far better a sweetener than commercial, refined sugar. And liquid jaggery goes one up on it!

Liquid Jaggery is the in-between product that is obtained after clarification, during the jaggery creation process. It’s made by boiling raw sugar cane juice in a cast iron. As the liquid begins to boil the molasses are separated out. (The removed molasses are usually used as cattle-feed in India.) Upon further boiling, the juice condenses into a thick viscous liquid, which is called liquid jaggery. If further boiled, it leads to form solid jaggery.

So basically, Kakvi (or liquid jaggery), is Gur before it becomes Gur

It’s also a traditional ingredient you’ll find being used for ages, in many rural Indian cultures. You might’ve heard of it as Kaakaavi in Marathi, Kakavi in Kannada, or Golnupa in Gujrati.

What does Kakvi Contain?

It is this cocktail of vitamins and minerals that make Kakvi the medicinal powerhouse it is seen to be. No other source of sugar has this breadth or concentration of nutrients.

Of course, once again, you shouldn’t be making Kakvi or Jaggery your go-to source for these nutrients. But if you’re going to have sugar, this is the most nutritious you can get.

In order to compare the benefits of our choices, we’ll use 3 simple parameters:
1. Weight-loss

To say it directly — none! This is because even though honey does have a slightly lower calorie density than Kakvi, at the micro-level it so minimal that in terms of calories it is only going to make a small difference even compared to the amount of calories present in your white, scary, processed sugar.

Both raw honey and Kakvi are undoubtedly less processed and more natural sweeteners. However, liquid jaggery is slightly ahead in terms of both nutrient width and density.

The glycaemic index (GI) is a rating system for foods containing carbohydrates. It shows how quickly each food affects your blood sugar (glucose) level when that food is eaten on its own, using values between 0-100.

In this case, even though solid jaggery stands at a considerably higher GI score than honey, Kakvi has a low GI score, making it an equal choice between the 2 liquids. ( Food GI is usually a concern for diabetics. And for them, any sugar, including Kakvi, is bad. Also, note that the GI of a composite food, like Muesli, is decided by the GI of all its ingredients – not just the sugar in it).

So, what is the ideal option?

Unfortunately, there is no one-thing-suits-all magic here! Every individual is looking for a different solution and defining ‘healthy’ on their own terms.

What brands need to do, is empowering consumers to make the right decisions. Not make the choice and then hide it from them.

For us, when we considered all options, we found Kakvi to be the winner. Nutrient density, ease of digestion, closest to origin – on all these fronts Kakvi won. So we chose it.

This isn’t to say honey or jaggery isn’t good. It’s just to tell you exactly what you’re eating, and declare it upfront, so you can make an informed choice.

May the power always be with you!