What are Abs? How Do You Build Them?

Is there already a 6-pack, waiting to be revealed? And why do we all want one in the first place? So you want abs?

That chiseled, hard, 2 by 3 matrix of not-so-limp-biscuits that will make you look oh-so-sexy. Which you shall then duly flaunt at a beach vacation which was planned for that specific purpose.

And you’ve been working towards it too!

You’ve been crunching and planking and leg-raising and ab-rolling your guts off. And you can regard it coming. You can feel you’re getting stronger down there. But you got nothing to show for it.

That tee, alas, will need to remain on this year too. Sigh.

Sound familiar? Well, it does to me.

Having been obese for most of my life, getting that 6-pack was my ultimate fantasy. But here’s the problem. 13+ years into my fitness journey, and I still don’t have abs!

I caught a few glimpses once when I was training for a full marathon. Today, under the right kind of studio lights, if I stand at a particular angle, I can show you a pale silhouette of how they will be once they come. But I don’t have them. And that’s frustrating.

What I do have, after all these years of struggle, is a roadmap to getting abs. And a lot more perspective on why I want them in the first place.

As you’d guess, it’s got a lot to do with the image of a ‘fit’ man/woman that the fitness industry has fed us. But as I’m discovering, it goes far beyond just that.

To get more specific, abs are a set of muscles. The picture below shows you the big parts that make up your abdominal area.

Just like your chest and biceps and legs — if you want your abs to grow and look good, you need to work on all 4 separately.

And just like those muscles, you need to hit your abs hard (harder than last time) to cause micro-tears in the muscle fibres, and then rest them (2–3 days) to let them grow.

So if you tend to do abs ‘everyday’ that’s not a good idea. It might make you feel good, but it’ll give you very sub-optimal results.

What does ‘Having Abs’ mean?

I bet you’ve heard someone around you say this –

“Oh, we all have abs, we just need to remove the layer of fat on top and reveal them.”

Remember, abs are like other muscles. So it’s like saying that we all have biceps and triceps, and they’d show up all cut and chiseled if we removed the fat.

True, but then this is how you’d look… 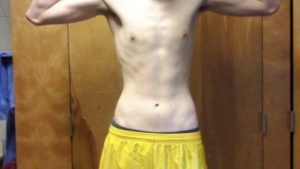 So then, if this isn’t what ‘having abs’ is, then what is it?

Abs, or the fitness-magazine-cover-kinds we all desire, are actually built by working on 3 parts. Visibility, Strength & Aesthetics.

Abs are made in the kitchen

I’m sure you’ve heard this too. And it’s true, but only if they change the statement to:

Abs are made visible in the kitchen

You might’ve spent years strengthening your core and defining each micro-sub-part of your ab-system, but if you want to flaunt it, you got to eat right and reduce fat. There just is no other way those abs are going to see the light of (a sunny, beachy) day.

But how much fat should I lose?

The lower you go, the more cut and defined your abs will appear. But anything over 10%, and you won’t get to see abs.

To give you a visual idea of where you are and where you need to go, here is a visual reference of how people with decreasing body-fat percentages look: 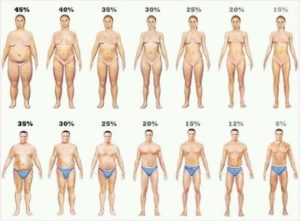 Also, here is a list of ways in which you can measure your body fat.

Here’s the kicker though, you can’t have <10% body fat just around your tummy and be fatter everywhere else. Which is another way of saying, there is no way to spot reduce.

So don’t go on doing hundreds of crunches and then feel disappointed that abs aren’t showing up. In fact, crunches aren’t very good at burning calories You might be better off running or doing HIIT if fat loss is the aim.

Because when you lose fat, you lose it in a similar percentage from all over.

Let’s say you have 5kg of fat on your tummy and just 1kg on your chest and shoulders. When you lose fat and say lose 10% of it, you’ll lose it equally from everywhere. That’s 500gm off your tummy, and 100gm off your upper body. No way around it. Sad but true.

I tackled visibility first because that’s where the ‘imagery’ of abs starts. We all want abs, not to keep them to ourselves, but to show them off. And for that, they need to be visible.

But if you want your abs not just to show, but to ‘pop’, to jut out of your frame, like packs of biscuits and not single serves, then you got to work on strength. And that has benefits that far, far outweigh the vanity-induced, fitness industry-fed craving for a perfect surfboard.

And guess what! You can’t spot-reduce, but you CAN spot-strengthen!

Abs are muscles, remember. So if you want to make them big and strong, you’ve got to grow them. Through progressive overloading. And rest.

So next time you’re planking, and getting bored extending that 1-minute to 2 and then 3, add some weight! Keep a 10kg plate on your back and plank. 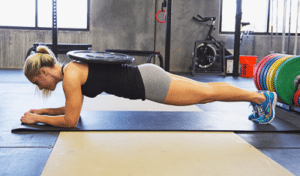 If you want your core to get stronger, you’ve got to demand more work from it. Heavier work.

And you definitely must want a stronger core. Because it feeds everything else you do.

Do it for the ‘popping-out’ look or strength. But build a solid core, and you’ll be a happier person.

Finally, with visible, strong, big abs in the bag, we come to sculpting the ‘look’.

And as with any kind of sculpting, it’s as much about the sculpture, as it is about the detailing around it. Abs, are not different.

There are 3 other parts around your rectus abdominals, that never get due recognition, but are the real key players in getting that sculpted look.

Serratus- let’s enlist Arnold’s help to see what these are:

I wouldn’t blame you if you thought these were, well, just ribs.

But they aren’t. They’re a small, incredibly hard to target, set of muscles on both sides of your abs that contribute massively to that ripped look. They provide, if I may call it that, a certain sideway relief to the boring, straight-line abs.

Just the fact that since these are ‘outside’ the main abs section, they tend to get missed out. But as you can see from the pics above, without these little adornments around your abs, you won’t get even half the look you deserve after all that hard work.

So that’s my roadmap to getting those perfect abs.

Eat right for Visibility → Strengthen for the ‘pop-out’ look → Take it to the next level by working on Aesthetics.

You can google exercises for targeting each of these parts. Or just ask me in the comments or as a reply to the newsletter, and I’ll help you out.

Why this obsession with Abs?

We are, all of us, victims of popular media and the image of a fit person it has fed us over the years. I’m not even going to try denying that or claiming that I’m above it.

So yes, I began my abs journey (obsession), from vanity.

But over the years, while my need for that visual 6-pack reward hasn’t waned, I have discovered many, many more dimensions to my goal. From doing cool stuff like ‘Mid-Air-Step-Ups’ to insane ones like a ‘Human-Flag’, I’ve discovered how a strong core accentuates all the other strength you’ve built and acts as a force multiplier.

But even more importantly, it’s made everyday life so much more enjoyable.

I suffer from a rare, one-in-a-million spinal cord disease called Scheuermann’s. I won’t go into details, but suffice to say that I have a permanently bent mid-to-upper back, which in turn makes it really tough for me to sit upright for long hours or pick heavy weights, or generally spend a very active day without experiencing severe back-pain by evening.

If it did that for me, imagine what it can do for you! And then go back to imagining yourself topless on the beach.