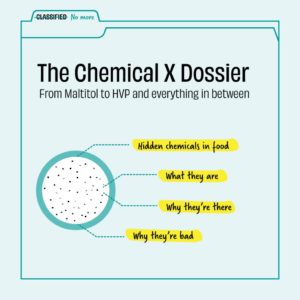 Murmurs have long been heard about alien ingredients in our food.

We now have access to classified files that contain details of these chemicals’ food history.

What we are about to present is a stark reminder that strange chemicals lurk in food all around us. And that we still don’t know why they came here, what they want from us, or even who they are for that matter.
Which is why we introduced the Chemical X files on our Instagram profile many months ago, and now, we’re making it into a series of blog posts that will cover everything from Maltitol to HVP and everything in between.
For now, we start with 3 shady chemicals that are specific to Sugar (since it’s sugar month): SCF, Maltitol and Maltodextrin. Let’s begin. 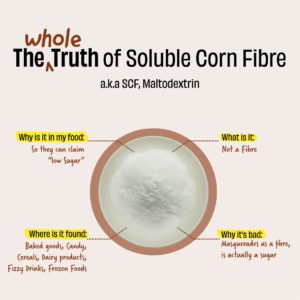 SCF starts as corn syrup, which is already chemically processed (for all you know, the source might be GMO corn). The corn syrup is first heated, then broken down even further through a process called enzymatic hydrolysis.
Enzymes breakdown the syrup into a non-digestible, low-sugar fiber, which is then filtered several times into a tasteless white powder. Fits the bill of a shady chemical doesn’t it?
That’s SCF.
Essentially, another ingredient used by the food industry to replace sugar – so they can then claim ‘No Sugar’ or ‘Reduced Sugar’ in their products.
It’s in your cereal, your cookies, your candy – it’s everywhere – considering that it has infiltrated most of the food world. And it hides under the innocuous garb of ‘fiber’, which will make you feel that it’s something ‘natural’. When it is anything but! 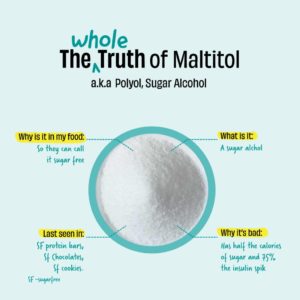 Maltitol – just as bad, but at least doesn’t have ‘fiber’ in it’s name. It survives in our food because manufacturers use it to put a sugar free label on their products. It has half the calories of sugar, but it causes an insulin spike that’s 75% that of sugar!
And most importantly, there aren’t enough studies to prove whether maltitol consumption is safe in the long-run. Especially for pregnant women and children.
If you think it hasn’t seen the inside of your home, think again. Check the back of your sugar free cookies, or that “healthy keto friendly” chocolate, and you’ll make eye contact with our slippery suspect!
Like we said, there is furious debate ongoing with views on both sides of the argument for this one’s safety in the long run. So keep an eye out for this one, even maybe a Google alert 😉 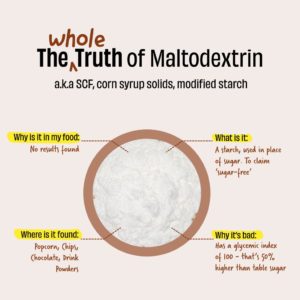 This ingredient too survives in our food by avoiding being called a ‘sugar’. But in truth, it causes an insulin spike that’s worse than table sugar!
And its as prevalent as the others. Check the back of your kid’s malt-based chocolate powder, or that packet of chips, and you’ll know!

These were just 3 suspects. We’ll be calling out more of these in the future and you know that we’ll let you know 🙂