Carbs Vs Net Carbs: What should you be counting? We have spoken a lot about innovative ways in which ‘healthy’ snacks try and deceive you into believing they’re good for you. All that discussion culminates today in the one debate that’s been eating the low-carb-dieting world.

Carbs or Net-Carbs. What should you be counting?

So here’s a blog, your very own weekend truth-teller, jumping right into this muddle. And like we always do, let’s start with the basics.

What are Net Carbs?

Net carbs are carbs that your body can fully absorb and hence derive calories from.

Fibres are carbs that enzymes in your small intestine can’t process. They pass through directly to your colon. Similarly, sugar-alcohols like Maltitol, Erythritol, etc., are only partially absorbed by the body. They do not enter the bloodstream in full.

Taking off from these facts, low-carb food peddlers came up with a new term: Net carbs. Which, as per them, are the exact amount of carbs in a food that your body can actually absorb.

Their logic: Stuff that your body can’t absorb, carbs that never enter your bloodstream, and hence do not lead to an insulin spike, shouldn’t be counted by dieters looking to restrict total carbs under a certain number. This is how low-carb messiahs pop up and give you hope. They argue that you must not look at the total carbs because some of those are in the form of fiber that your body can’t process.

I assume, that by now you’ve assumed, that it can’t be that simple.

Sugar Alcohols aren’t entirely non-absorbable by the body. Maltitol, for example, is partially absorbed by the body. About 40–50% of Maltitol gets processed and enters the bloodstream. That’s why it delivers about 2kcal/ gm. Unlike the usual 4kcal that a normal carb would.

So, to accurately calculate Net Carbs, you’d have to add back half of the Maltitol.

Wait, it gets worse.

The Real Problem with Net Carbs

Many products are marketing themselves as ‘Low Net Carbs’ or even as ‘Zero Carb’. 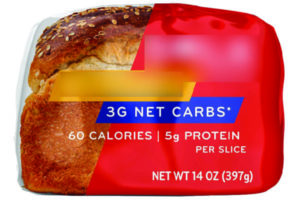 Obviously, when you turn the pack, you realize that it’s not actually zero carbs. Rather, all the carb is either from fibre or sugar alcohols and these cunning marketers have twisted that fact to claim ‘ZERO’ carbs.

The problem is that there isn’t significant enough research done on the side effects of stuffing ourselves with these chemically derived dietary fibres and alcohols.

The idea of them sounds great. Eat stuff that gives you the taste but doesn’t get processed by the body. But we’ve never consumed them in such copious amounts. The effects of this unprecedented level of sugar alcohol on our gut bacteria is far from established.

But sufficient scientific research apart, the real trouble with these claims is their psychological effect. I assume that most people who opt for foods with such low-carb claims are trying to lose weight. Also remember that the most basic, inviolable equation for weight-loss is that ‘Calories In’ must be lesser than ‘Calories Out’.

Eat more calories than you can burn, and it doesn’t matter which source they come from. Whether that source is low-fat or no-carb or high-protein. The truth is that you will NOT lose weight in this way.

And that’s where the Net-Carb fraud really hurts dieters.

It’s easy to pick up that Zero-Carb bread and feel that you haven’t eaten much of anything at all. But remember, that net carb, even if we believe that definition for a second, comes wrapped in fats and proteins and hence calories.

Since these foods taste great and seem like they don’t cause much harm, most people end up consuming a lot of them. Many times enough to replace whole meals. Which is a really, really bad idea.

Fibre was a good thing when it came in the form of fruits and vegetables, covered with vitamins and minerals. Sugar too was good, when it came wrapped in fibre.

But with stuff like Maltitol and other sugar alcohols, we’re doing another Refined Sugar. Trying to kill a golden-egg laying goose, hoping to extract all that dough in one go.

But we know how that story ends.

Note: Net Carbs isn’t a real ‘thing’. It’s not a term acknowledged by either US or Indian FDA. It’s just a term that food marketeers thought up. It isn’t checked or regulated in any way.